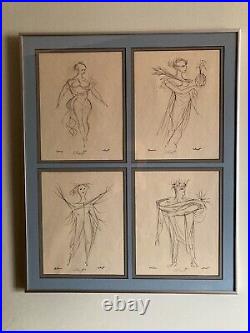 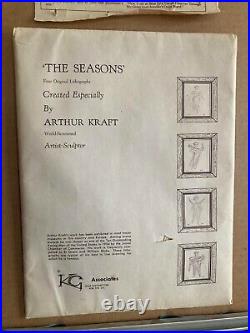 Kansas City Expressionist Arthur Kraft (1922 - 1977) Four Signed Lithographs'The Seasons' in silver frame with gray and blue matte board. The original envelope containing the prints is pasted to the reverse of the framed prints.

A short article from The Kansas City Star referencing an event from Arthur Kraft's career is also pasted on the back. Arthur Kraft was a painter, sculptor and muralist. He is best known for Court of the Penguins on the Country Club Plaza. He later attended Yale University's School of Fine Arts. Kraft had early success in the 1940s. He had one-man show at the Salon de Jean Cocteau in Paris. And he showed his work at The Whitney Museum of American Art, alongside iconic artists such as Robert Motherwell, Willem DeKooning and Georgia OKeeffe.

Kraft won the Audubon Artist Society national painting award in 1946. It launched Kraft onto the national scene. His prolific mural work was frequently documented in LIFE Magazine throughout the 1950s and 1960s. The item "Kansas City Artist Arthur Kraft Four Signed Lithographs'The Seasons' Framed" is in sale since Sunday, January 31, 2021. This item is in the category "Art\Art Prints".

The seller is "kansas1970" and is located in Mission, Kansas. This item can be shipped to United States.