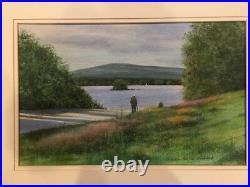 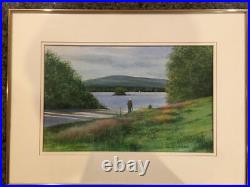 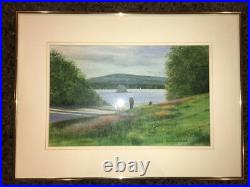 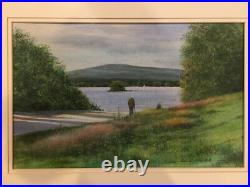 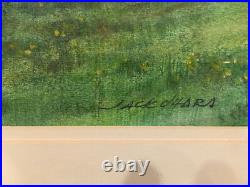 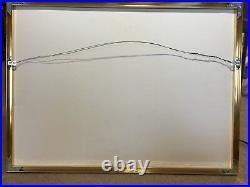 Work measures 17 " x 11". Though not removed from frame, painting, frame, and matting appear to be in good condition. Artist's Bio (from AskArt website). Jack O'Hara was born January 27, 1921 in Kansas City, MO. He attended the University of Kansas, Kansas City Art Institute and the American Academy of Art in Chicago.

He is a member of the American Watercolor Society and has exhibited in numerous juried shows. Winning awards in several shows, including a one-man show of Irish paintings at the Nelson-Atkins Museum of Art in Kansas City in 1978, his work was presented in a Print show (Repeated Exposures) at the Nelson in 1982 and again in an invitational show of K C Art Institute Alumni in 1985 at the Nelson. Has also had one-man shows in Topeka, Wichita, Hutchinson, Atchison, Lawrence, St. He has paintings in corporate and private collections in the United States and abroad including the permanent collections of the K C Art Institute; the University of Kansas Alumni Center; The Spencer Museum, Lawrence, KS; the Muchnic Museum, Atchison, KS; the Kemper-Albrecht Museum, St. And the Farnsworth Museum, Rockland, Maine.

Private and corporate collections include the offices of Senator Nancy Kassebaum, Senator Thomas Eagleton and Senator Audry Langworthy and in more than forty financial institutions in Kansas and Missouri. Jack was Artist-in-Residence at Notre Dame de Sion in 1985, and on the Board of the Friends of Art and later appointed to the Council of Fellows at the Nelson, Atkins. A painting titled Land of Ahs was included in the book The Kansas Landscape published by the Kansas Dept. The paintings in this book toured the state of Kansas for two years before going to Washington, D.

This painting was selected to be reproduced to promote the book and it was later reproduced in American Artist magazine. Most of Jack's paintings are executed in a representational style. Although subject matter obviously plays a major role, he nevertheless looks for strong abstract designs in nature and seeks to express the essence of the scene rather than to depict every detail within it. If he pushes the painting beyond an understatement, Jack says he is usually unhappy with it.

Jack says that if he paints with a degree of technical skill; is spontaneous and not belabored; and conveys a mood; he feels that he has accomplished what he set out to do. In this endeavor, Jack O'Hara feels he is sometimes successful-sometimes not. Please also note the majority of Jack O'Hara paintings are watercolor landscapes although there are exceptions.

He is known to do oil paintings, but they are much much more uncommon. He also has produced large numbers of signed/numbered limit edition prints. The item "Kansas City Artist Jack O'Hara (1921 2012) Signed Original Art" is in sale since Sunday, December 10, 2017.

This item is in the category "Art\Paintings". The seller is "overthetoppscollectibles" and is located in Olathe, Kansas. This item can be shipped to United States.